In the late 1800's, any loudspeaker was considered exotic. Today, most of us take the wonders of sound reproduction for granted. 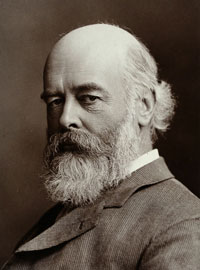 It was 1880 before Thomas Edison had invented the first phonograph. This was a horn-loaded diaphragm that was excited by a playback stylus. In 1898, Sir Oliver Lodge invented a cone loudspeaker, which he referred to as a "bellowing telephone", that was very similar to the conventional cone loudspeaker drivers that we know today. However, Lodge had no intention for his device to reproduce music because in 1898 there was no way to amplify an electrical signal! As a result, his speaker had nothing to offer over the acoustical gramophones of the period. It was not until 1906 that Dr. Lee DeForrest invented the triode vacuum tube. Before this, an electrical signal could not be amplified. The loudspeaker, as we know it today, should have ensued then, but it did not. Amazingly, it was almost twenty years before this would occur.

In 1921, the electrically cut phonograph record became a reality. This method of recording was far superior to the mechanically cut record and possessed almost 30 dB of dynamic range. The acoustical gramophone couldn't begin to reproduce all of the information on this new disc. As a result, further developments in loudspeakers were needed to cope with this amazing new recording medium.

By 1923, Bell Telephone Laboratories made the decision to develop a complete musical playback system consisting of an electronic phonograph and a loudspeaker to take advantage of the new recording medium. Bell Labs assigned the project to two young engineers, Chester W. Rice and Edward W. Kellogg.

Rice and Kellogg had a well equipped laboratory at their disposal. This lab possessed a vacuum tube amplifier with an unheard of 200 watts, a large selection of the new electrically cut phonograph records and a variety of loudspeaker prototypes that Bell Labs had been collecting over the past decade. Among these were Lodge's cone, a speaker that used compressed air, a corona discharge (plasma) speaker, and an electrostatic speaker.

After a short time, Rice and Kellogg had narrowed the field of "contestants" down to the cone and the electrostat. The outcome would dictate the way that future generations would refer to loudspeakers as being either "conventional" or "exotic".

Bell Laboratory's electrostat was something to behold. This enormous bipolar speaker was as big as a door. The diaphragm, which was beginning to rot, was made of a pig intestine that was covered with fine gold leaf to conduct the audio signal.

When Rice and Kellogg began playing the new electrically cut records through the electrostat, they were stunned and impressed. The electrostat performed splendidly. They had never heard instrumental timbres reproduced with such realism. This system sounded like real music rather than the honking, squawking rendition of the acoustic gramophone. Immediately, they knew they were on to something big. The acoustic gramophone was destined to become obsolete.

Due to Rice and Kellogg's enthusiasm, they devoted a considerable amount of time researching the electrostatic design. However, they soon encountered the same difficulties that even present designers face; planar speakers require a very large surface area to reproduce the lower frequencies of the audio spectrum. Because the management at Bell Labs considered large speakers unacceptable, Rice and Kellogg's work on electrostatics would never be put to use for a commercial product. Reluctantly, they advised the Bell management to go with the cone. For the next 30 years, the electrostatic design lay dormant.

During the Great Depression of the 1930's, consumer audio almost died. The new electrically amplified loudspeaker never gained acceptance, as most people continued to use their old Victrola-style acoustic gramophones. Prior to the end of World War II, consumer audio saw little, if any, progress. However, during the late 1940's, audio experienced a great rebirth. Suddenly there was tremendous interest in audio products, and with that, a great demand for improved audio components. No sooner had the cone become established than it was challenged by products developed during this new rebirth.

In 1947, Arthur Janszen, a young Naval engineer, took part in a research project for the Navy. The Navy was interested in developing a better instrument for testing microphone arrays. The test instrument needed an extremely accurate speaker, but Janszen found that the cone speakers of the period were too nonlinear in phase and amplitude response to meet his criteria. Janszen believed that electrostats were inherently more linear than cones, so he built a model using a thin plastic diaphragm treated with a conductive coating. This model confirmed Janszen's beliefs, for it exhibited remarkable phase and amplitude linearity.

Janszen was so excited with the results that he continued research on the electrostatic speaker on his own time. He soon thought of insulating the stators to prevent the destructive effects of arcing. By 1952, he had an electrostatic tweeter element ready for commercial production. This new tweeter soon created a sensation among American audio hobbyists. Since Janszens tweeter element was limited to high frequency reproduction, it often found itself used in conjunction with woofers most notably, those from Acoustic Research. These systems were highly regarded by all audio enthusiasts.

As good as these systems were, they would soon be surpassed by another electrostatic speaker.

In 1955, Peter Walker published three articles regarding electrostatic loudspeaker design in Wireless World, a British magazine. In these articles, Walker demonstrated the benefits of the electrostatic loudspeaker. He explained that electrostatics permit the use of diaphragms that are low in mass, large in area and uniformly driven over their surfaces by electrostatic forces. Due to these characteristics, electrostats have the inherent ability to produce a wide bandwidth, flat frequency response with distortion products being no greater than the electronics driving them. 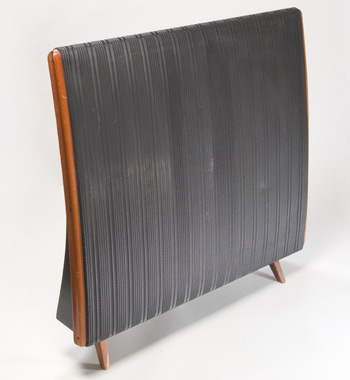 By 1956, Walker backed up his articles by introducing a consumer product, the now famous Quad ESL. This speaker immediately set a standard of performance for the audio industry due to its incredible accuracy. However, in actual use, the Quad had a few problems. It could not be played very loud, it had poor bass performance, it presented a difficult load that some amplifiers did not like, its dispersion was very directional and its power handling was limited to around 70 watts. As a result, many people continued to use box speakers with cones.

In the early 1960's Arthur Janszen joined forces with the KLH loudspeaker company, and together they introduced the KLH 9. Due to the large size of the KLH 9, it did not have as many sonic limitations as the Quad. The KLH 9 could play markedly louder and lower in frequency than the Quad ESL. Thus a rivalry was born.

Janszen continued to develop electrostatic designs. He was instrumental in the design of the Koss Model One, the Acoustech and the Dennesen speakers. Roger West, the chief designer of the Janszen Corporation, became the president of Sound Lab. When Janszen Corporation was sold, the RTR loudspeaker company bought half of the production tooling. This tooling was used to make the electrostatic panels for the Servostatic, a hybrid electrostatic system that was Infinity's first speaker product. Other companies soon followed; each with their own unique applications of the technology. These include Acoustat, Audiostatic, Beveridge, Dayton Wright, Sound Lab and Stax, to name a few.

Electrostatic speakers have progressed and prospered because they actually do what Peter Walker claimed they would. The limitations and problems experienced in the past were not inherent to the electrostatic concept. They were related to the applications of these concepts.

Today, these limitations have been resolved. Advancements in materials due to the U.S. space program give designers the ability to harness the superiority of the electrostatic principle. Today's electrostats use advanced insulation techniques or provide protection circuitry. The poor dispersion properties of early models have been addressed by using delay lines, acoustical lenses, multiple panel arrays or, as in our own products, by curving the diaphragm. Power handling and sensitivity have also been increased.

These developments allow the consumer the opportunity to own the highest performance loudspeaker products ever built. It's too bad Rice and Kellogg were never able to see just how far the technology would be taken.

Uncompromising performance. Unflinching accuracy. Unwavering reliability. Harnessing the myriad technical advantages of electrostatic principles to recreate sound in its truest form—this is what MartinLogan is all about.